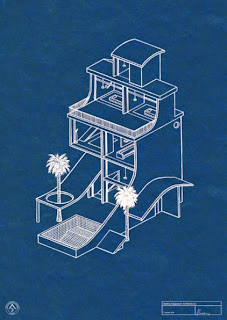 The Tsunami villa by Luis Lazaro Matos
Published by Jacopo Miliani a 6:20 AM No comments: 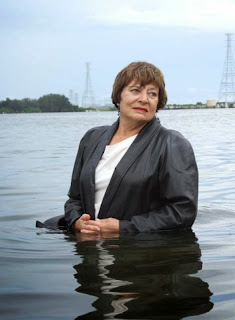 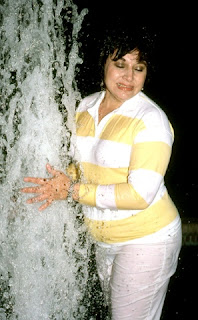 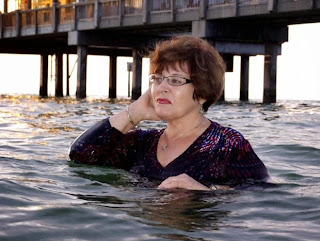 http://www.kesselskramerpublishing.com
Published by Jacopo Miliani a 4:20 PM No comments:

Demo of Beat It composed using only Michael Jackson’s voice As Jackson couldn’t fluently play any instruments, he would sing and beatbox out how he wanted his songs to sound by himself on tape, layering the vocals, harmonies and rhythm before having instrumentalists come in to complete the songs. One of his engineers Robmix on how Jackson worked: “One morning MJ came in with a new song he had written overnight. We called in a guitar player, and Michael sang every note of every chord to him. “here’s the first chord first note, second note, third note. Here’s the second chord first note, second note, third note”, etc., etc. We then witnessed him giving the most heartfelt and profound vocal performance, live in the control room through an SM57. He would sing us an entire string arrangement, every part. Steve Porcaro once told me he witnessed MJ doing that with the string section in the room. Had it all in his head, harmony and everything. Not just little eight bar loop ideas. he would actually sing the entire arrangement into a micro-cassette recorder complete with stops and fills.” http://lacienegasmiled.tumblr.com/post/77598143356/demo-of-beat-it-composed-using-only-michael
Published by Jacopo Miliani a 3:45 AM No comments: 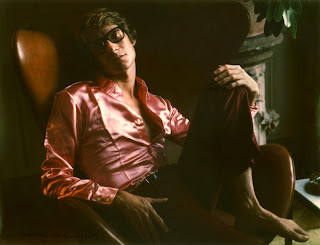 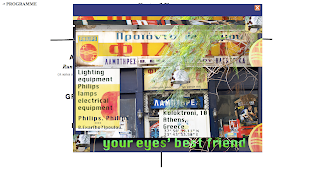 Published by Jacopo Miliani a 3:22 AM No comments:
labels: Ariella Yedgar, Out Of Focus, Rosie Cooper 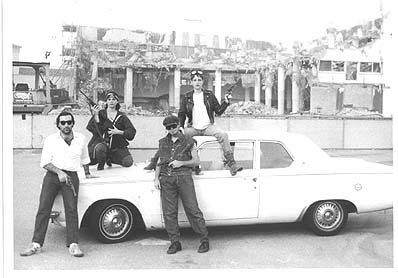 Elisha Shapiro (aka Nihilist Field Marshal Shapiro) is a Los Angeles-based media prankster and conceptual artist. He has been creating his neo-dadaesque public spectacles for the past 25 years and first came to public attention with his 1984 Nihilist Olympics. The Olympics were followed by a Nihilist campaign for President in 1988 and a Nihilist campaign for LA County Sheriff in 1994. Nihilism Expo--a World's Fair for Nihilists was his project, staged in 1999. He currently hosts a monthly cable TV show called Nihilists' Corner. In 2006, Shapiro was the Nihilist Party Candidate for Governor of California.

http://nihilists.net
Published by Jacopo Miliani a 1:29 AM No comments:
labels: Elisha Saphiro 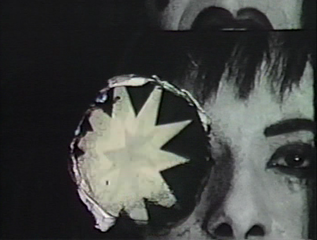 Luther Price grew up in Revere, Massachusetts with his sister Sally. Together the siblings would obsessively watch daytime broadcasts of woman’s melodramas on their black and white TV—films like Imitation of Life or Mildred Pierce—re-enacting the histrionics on a reel-to-reel recorder. This obsessive kind of self-dramatization and hysterical re-enactment continued throughout Price’s career, first through the various, self-invented monikers that he adopted while earning his undergraduate degree in Fine Arts at MassArt (personas included LA, Laija Brie Aethy, Brigk Aethy, Brick, Fag and Tom Rhoads), and then in his later performative revisitations of traumatic incidents like a gunshot wound, deaths in the family and childhood nightmares.

Larry Paradiso, Laija Brie Aethy, LA, Brick and Fag were all predominantly sculpture and performance artists with different logic structures built into each. These characters were not performances per se. Rather, the artist would form personalities in order to execute his fine art projects, often assuming these characters’ mannerisms or affectations full time. Laija Brie went to Nicaragua on a cultural exchange program in 1985 and adapted to his surroundings, becoming Brigk Aethy. There Brigk was accidentally shot at close range by his 15-year-old bodyguard, a devastating wound forcing his return to Boston by emergency means and leaving him teetering between life and death. Eat Fuck Live Shit Want Need was a sculptural installation that the artist created in immediate response once he regained some semblance of health. Permanently scarred, Brigk was fundamentally changed by the event for years to come. The artist turned to filmmaking as an extension of his sculptural practice, inventing the persona Tom Rhoads to plumb his childhood traumas, particularly the circumstances surrounding the suicide of his aunt Sally at age of 23 on the day of Price’s birth.

“Tom Rhoads was a nice guy who would buy you an ice cream cone,” Price explained, an adult manifestation of his haunted childhood. Rhoads made frightening Super 8mm visions of a fecund homecoming, dressing as his mother in Warm Broth, 1987-88, and using those original reel-to-reel performances with his sister for Green, 1988. These early performance films were so startling in their raw vitality they were championed by filmmakers, curators and critics alike, who responded to their urgency of vision and alarming psychological complexity, frequently citing the use of Super 8mm as a medium to reconstruct memory or a traumatic past. As Rhoads evolved, it became clear the work was becoming too harsh, too brutal for such a childlike filmmaker. Tom Rhoads started Sodom in 1988, but the artist soon realized, “[Tom] couldn’t have made Sodom.” So cleft was that film between such opposing forces, he was forced to invent his longest-running persona, Luther Price, out of his apotheosis of good—Martin Luther King Jr.—and that of evil—Vincent Price.

The resulting film and filmmaker would make an immense impact on the avant-garde film community of Boston and the world over. Sodom is extreme, as horrifying as it is whimsical. Made of found gay pornography and biblical disaster footage, the voracious boys of the porn footage are sutured into sequences of cataclysm via a rudimentary hole-punch technique. Halos circle these victims of dogma, victims of plague, victims of hedonism as they dance in a sea of religious calamity, celebrating and damning, all in the same frame. Sodom sparked a zealous coup among film programmers and audiences, who were fiercely divided by an artist who some regarded an heir to Kenneth Anger and Jean Genet, others, a homophobic zealot. Sodom provides no easy answers for viewer. With its gorgeous organic aesthetics, hypnotic soundtrack, gruesome and graphic depictions, the piece performs a harsh rebuttal to the ideals of contemporary gay lifestyle.

Price continued, prolifically producing two strains of film work: his performative films carried on from previous efforts, with the filmmaker embodying physically and emotionally grueling characters, as seen in the feature-length A, 1995, and the Clown and Meat series, 1992-94 and 1990-1999. The latter series revisits his traumatic shooting and later the loss of his entire family to cancer in the span of one year—a body of work which includes Ritual 629, 1999. Price’s other strain assembled found footage, imposing an emotional sense upon this chaotic world for future, foreign scrutiny. Early works in this vain included Bottle Can, 1993, In Black and White and Jelly Fish Sandwich, both 1994, pieces in which Price builds new associative structures of logic, “an attempt to put history into time capsules and send them into space, in the hope that someone will get the right message,” Lia Gangitano writes, “However, as the films’ scrambled forms suggest, the message has degenerated, history has become a series of misdirections.”

Price finished Me Gut No Dog Dog in 1995. A found footage film that culls army recruitment propaganda, gay pornography, family home movies and some amateur Karate narrative, Price uses the barrage of leisure-time footage and outmoded training films to build a personal past. Price fascinatingly coagulates these random scenes into a work recreating his childhood dread of the Vietnam draft. The impending horror of this institutionalized violence is layered against his dormant homosexuality and the army’s homosocial climate, a conflicted fear and thrill of being caught or forced into brute sexual encounters. The film recounts a loss of innocence, with (as in many of Price’s films) the voice of Karen Carpenter ringing its close, as she coos a pathetic rendition of The Beatles’ “Ticket To Ride.” Children file down communion isles as a pretty teen slams his head on a pillow, bracing against some aggressive, off-screen penetration and the tune’s chorus lyric, “He’s got a ticket to ride, and he don’t care,” suddenly acquires an ominous, thanatotic drive.

Due to duplication issues brought about by the explicit content of Me Gut No Dog Dog, Price has since only produced unique films, hand splicing, painting or warping existent footage in one-of-a-kind cycles of work. These hands-on processes are obsessive and laborious for Price, who still considers himself more a sculptor than filmmaker. Never one to linger on any one process, each new body of work almost becomes a skillful disavowal from its predecessor. The Inklbot series (1998-2008) is the result of the laborious hand-painting techniques, often working from nothing but clear leader, while the Biscuits series re-edits 13 identical 16mm copies of footage shot in an African American retirement home in Boston to arrive at a more emotionally accurate documentation of these living situations. Silk and Ribbon Candy (the latter, part of the Ribbons series) belong to this decade of abundant production. These works show the filmmaker re-creating contexts and revising the past, remolding existent images and narratives in lieu of adding to the din. Price has worked in this manner for the past decade, Ritual 629 being one of the last original footage pieces he has created. Not that this slows him. The filmmaker, who still lives in Revere, produces 10 or so films a year. —Bradford Nordeen
Published by Jacopo Miliani a 7:28 AM 1 comment:

The Encyclopedia of Fictional Artists 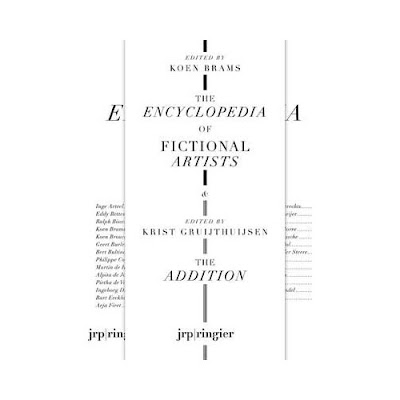 www.kunstverein.it/
Published by Jacopo Miliani a 8:53 AM No comments:
labels: Kunstverein 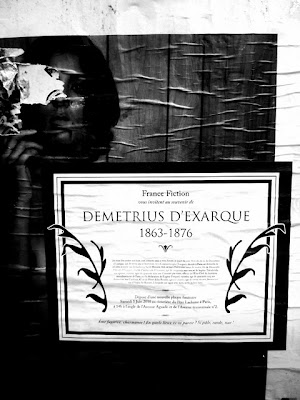 http://france.fiction.free.fr/
Published by Jacopo Miliani a 8:49 AM No comments: 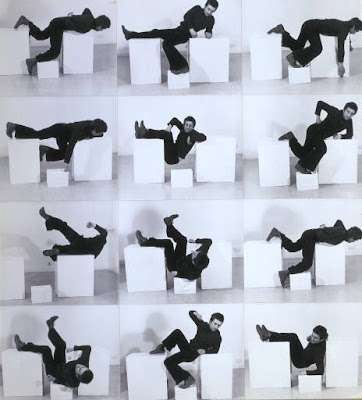 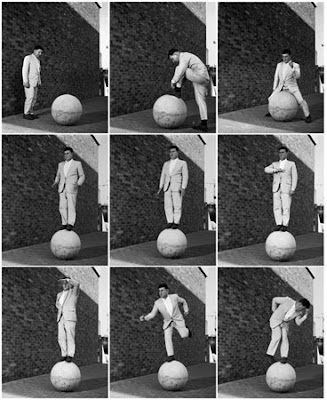 'Artist artist there is a sculpture in your body'
Published by Jacopo Miliani a 8:40 AM No comments:
labels: bruce mclean

This is also an essential part of the strategy to limit deleveraging actions.

Published by Jacopo Miliani a 6:00 AM No comments:

After a lecture on 'The 10 most ... Pop Music Video since I got YouTube', I decided to come back to the web, my personal web, and to propose it to my sharing community.

ENJOY and VOTE YOUR FAVOURITE!


For the image thanks to Niccolo!
Published by Jacopo Miliani a 2:05 AM No comments:

do you do you?

Published by Jacopo Miliani a 2:04 AM No comments:

Bob Fosse the pleasure of quoting in anticipation!
Published by Jacopo Miliani a 2:00 AM No comments:

thanks to chiara
Published by Jacopo Miliani a 1:58 AM No comments:

Published by Jacopo Miliani a 1:57 AM No comments:

thanks to Samon
Published by Jacopo Miliani a 1:56 AM No comments:

Para el norte, centro , sur....
thanks to Manuel!
Published by Jacopo Miliani a 1:53 AM No comments:

Published by Jacopo Miliani a 1:50 AM No comments:
Older Posts Home
Subscribe to: Posts (Atom)